No merciful neck breaking long drop. Noosed up on the tailgate of an army truck, then the truck pulled away.

The first woman is Jenny Barkmann, 24, a camp guard at Stutthof concentration camp, where she beat prisoners to death.

She took a long time to strangle to death. Even then it was more merciful than what she meted out. The others waiting their turns got to see her flopping around like a hooked fish.

She was considered pretty, certainly much more so than some of the other female guards like Ilse Grese, who to me looks like a female Frankenstein monster The prisoners called Barkmann "The Beautiful Specter".

Don't ever think for even one second that there are not young people like this who would gladly beat you to death for being a conservative if given the power to do so. Then go brush their hair and tidy up their makeup. 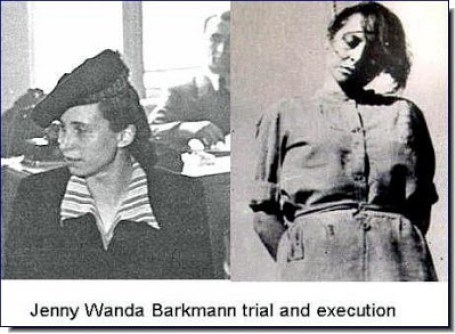